After spending another month in Madrid (exactly a year after our first stay), is it just as good as we remember?

This time last year we spent a month in Madrid – afterwards declaring ourselves to be madly in love with it and predicting it to be the next digital nomad hub. Now that we’ve refreshed our memories with yet another month in the city (in exactly the same apartment as last time)… how does it rank? Is it just as good as we remembered? And how’s our prediction panning out?

Here are some new things we learnt about Madrid this time around (or forgot to mention last time):

The partying is intense

We both wake up every day at 6am – and by 6.10am I’m out the door on a six-mile walk around the city. In most cities at that time, I’ll see the odd person walking to work, a few couples arguing on their way home from a party (the girl is usually crying and holding her heels), and some stag-doers finishing up for the night.

In Madrid though, it’s like the evening has only just started: it’s HEAVING. Bars are still open from the night before, and all the plazas are absolutely packed with people throwing up, kissing, peeing against trash cans/buildings/phone boxes/cars and dancing to nothing in particular. I’ve walked over enough used condoms to start my own latex company, and I’m on nodding terms with so many prostitutes that it’s starting to look suspicious.

By about 8am, it’s all over. The streets are clean and it’s like the night before never happened.

Until 1942, Spain was on Greenwich Mean Time. But in the middle of World War II General Franco wanted to show unity with his German and Italian Fascist allies, and he thought that joining their time zone (an hour later than Greenwich Mean Time) would be the best way to go about it. We consider this to be one of Franco’s zanier ideas, but the guy died in 1975 and the time zone hasn’t changed back… so maybe he was accidentally onto something.

Being an artificial hour ahead means that mornings are mega dark throughout Spain, but particularly in more western and central cities like Madrid. As a result, meals happen later in the day: lunch is at 2 or 3pm – after the darkness has cleared and the sun is high in the sky. And dinner is at 9 or 10pm – once it’s started to get dark again.

This city has the best menús del día

The menú del día is another of Franco’s legacies: in the early 1960s he introduced a policy that required all restaurants over a certain size to provide an affordable and nutritious meal for Spanish workers, so that they wouldn’t have to travel to and from their homes in the middle of the working day.

The menú del día (“menu of the day”) lives on throughout the country; it usually consists of a starter, main course and dessert or coffee, plus bread and a drink (wine, bottled water or a soft drink) for about €10. The menu changes every day throughout the working week.

It’s only usually available at lunchtime, and it’s offered by even the smartest restaurants – those that would typically charge upwards of €50 for a meal at dinner.

As we seem to spend half our lives in Spain these days, we’ve enjoyed many a menú del día throughout the country. And although the quality of food is pretty good everywhere, Madrid is the clear winner. We’ve had roast quail, lamb stew, salmorejo (similar to gazpacho but better), lobster risotto, beef carpaccio and so much more, and it’s almost always been amazing.

There are some great wifi cafes

When we lived in Madrid in 2013, there were already a fair few nomad-friendly cafes. But either we weren’t using Foursquare/Yelp/blogs effectively enough, or the place has EXPLODED in the last 12 months with comfortable, friendly, wifi cafes.

Here are some of our favourites:

This time last year, we predicted-stroke-hoped that Madrid would become the next destination for digital nomads.

And it’s really happening! Compared to Chiang Mai, Prague and Berlin, it’s got a lot of catching up to do. But still…the numbers are slowly rising. And thanks to our Find A Nomad map, you’re able to contact and meet up with whichever other digital nomads happen to be there at the same time as you!

As with most of Spain, the coffee isn’t great … unless you know where to go

Most cafes in Madrid provide torrefacto coffee. Torrefacto is the practice of adding sugar to some of the coffee beans during roasting; the sugar burns and the beans become coated in a shiny black glaze which protects them from oxidisation and preserves them for longer than regular coffee beans.

While torrefacto was first introduced to Spain for preservation purposes, it really took off after the Spanish Civil War – when food and drink were scarce. Sugar is cheaper than coffee, so companies used it to bulk up the coffee beans while dramatically decreasing the cost, pound for pound, making it more widely available for Spanish consumers.

It’s been quite a while since the Civil War ended, but torrefacto coffee remains (in supermarkets too) – probably a result of Spanish consumers getting used to the taste, as well as coffee companies loving the profits that come from selling sugar for the price of coffee.

Unfortunately, it tastes horrible. Horrible. The torrefacto process makes the drink very bitter and acrid, and many non-Spanish people struggle to drink it without pulling a “I just sucked on a lemon” face. (Some non-Spaniards apparently like it, but… there you go. I have no answer.)

If you don’t want to drink torrefacto coffee, you’re in luck(ish): a coffee renaissance is very slowly happening in Madrid, and there are currently three places that serve properly amazing stuff:

We had to mail a letter to England while we were there. So we went to the seventh floor of a department store, lined up for 40 minutes in the furnishings department (literally among the sofas and lamps), then got told by the woman at the counter that our chosen method of mailing wouldn’t be possible… until we managed to convince her that it would.

The previous day we’d tried our luck at a different post office, but the staff must have decided to take an 11am siesta.

Other blogs say that all post offices throughout Spain are this bad. Our experience in Valencia was practically joyous by comparison, but perhaps we were having a lucky day.

It’s just as beautiful as we remember, but more graffitified

The buildings in Madrid are some of the most beautiful we’ve seen – and they’re consistently beautiful throughout the city (it’s not like you turn left and you’re suddenly in the “ugly bit”, which is the case with so many cities).

But when walking around, we noticed far more graffiti than last year.

And we can’t figure out if we were just walking around with rose-tinted specs last time, or if there really is more graffiti. Either way, it gives the city an air of angst and dissatisfaction that we hadn’t appreciated a year ago.

There are some GREAT day trips

Towards the end of our stay, our lovely Airbnb host told us about some great day trips and offered us the use of his car whenever we wanted.

We only made it out once, and we headed to Manzanares del Real – a tiny town in the Sierra de Guadarrama mountains, about 45 minutes from Madrid.

Here are some views: 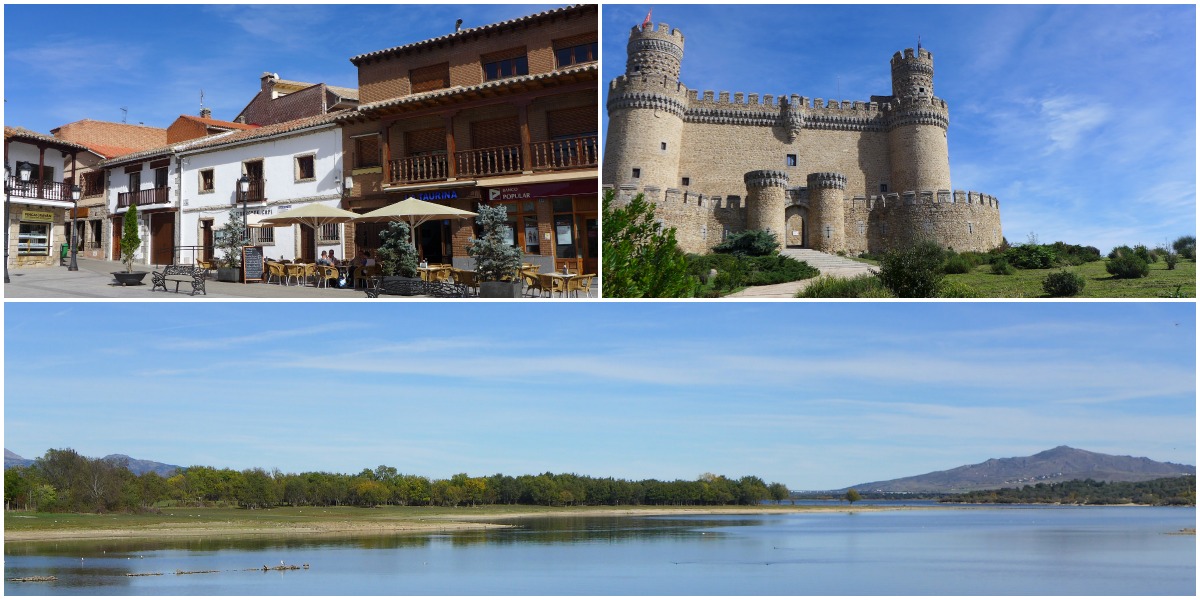 Other day trips our host recommended were:

Most Madrileños in the service industry have at least a basic understanding of English, but it’s not like in Barcelona where they’ll speak as if they’ve all been raised by an American nanny (“Hey guys, what can I get you?”).

This is especially the case in the more traditional bars and restaurants (and believe me, that’s where you want to be hanging out): the waiters will try their bestest, but they really appreciate your efforts to ask for things in Spanish. Also, many of the menus in such places will be in Spanish only.

Have you ever lived in Madrid? How do you think it compares to other Spanish cities – both in general and specifically for digital nomads?

And are there any activities we should do, sights we should check out or wifi cafes we should visit next time? (Because there’ll DEFINITELY be a next time!)

Posted on November 12, 2014 by Mish @ Making It Anywhere in Travel & accommodation.