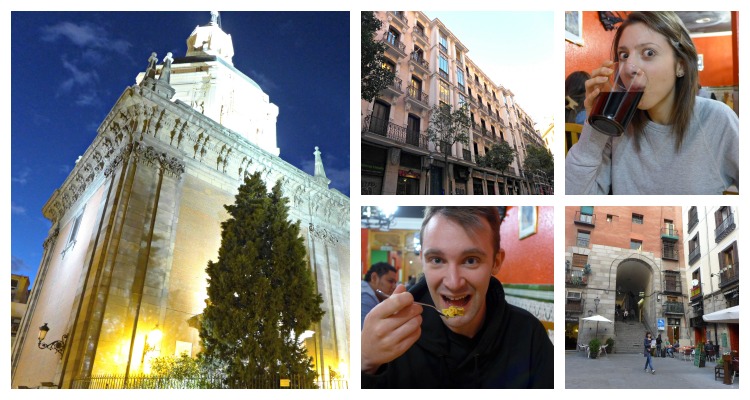 Berlin, Chiang Mai, Ubud, Ho Chi Minh City… travel to any of these destinations and you’ll find coworking spaces, trendy coffees and paleo breakfasts galore to cater for the influx of digital nomads.

Madrid… not so much.

But after spending four cumulative weeks here (one week back in May, and now three weeks this past month), we can confidently say that it’s our FAVOURITE place to be a digital nomad – in Europe if not the world.

Not Chiang Mai cheap, but cheaper than most Western European countries we’ve been to. And it’s cheap in the “right” ways too. In Berlin, it’s only really good value if you want to die of a heart attack by the age of 40 – i.e. you can get a massive doner kebab, pizza or humongous roasted chicken for less than the cost of the sweatbands you’ll DEFINITELY need to buy, but good luck finding a reasonably priced restaurant serving anything the right side of healthy.

In Madrid, by contrast, you can get a “Menu del Dia” in most restaurants every lunchtime: a three-course meal (including bread and wine) for 10 euros. Some restaurants also do a Menu del Dia for dinner too: the other night we got practically a loaf of bread, three courses, and half a bottle of wine each (i.e. a full bottle between us) for 10 euros each. Also, the food is superb. We’re talking quail braised in lentils, and sirloin steak with salsa and roasted potatoes.

Supermarket food is also pretty good value. We like to cook a lot, and it pains us when we go to the local supermarket in other countries and discover we’re almost better off eating out. (NYC is a great example of this.) In Madrid, the fruit, veg and fish all cost way less than in most European cities we’ve been to.

As for the wine in wine bars… even in upscale bars you can get a large glass for 1.5 euros – and of course they’ll throw in a plate of tapas – usually two – for that too.

Public transport is cheap too – far cheaper than Berlin or London. And Madrid is known for having one of the best public transport networks in Europe. Having said though, you probably won’t need to use it much…

Unlike in Bangkok or Berlin, we hardly ever need to get the train or bus here because the city is so compact. And it’s fascinating to walk around: each neighbourhood is entirely different from the next one in terms of people, architecture, and places to eat and drink.

Admittedly “prettiness” is desirable of most cities – regardless of whether you’re a digital nomad or not. But I thought it necessary to add this one in because Madrid really is exceptionally beautiful, and we had no idea it was even supposed to be until we arrived. No one ever mentions it, even though it’s pretty much on par with Paris.

It’s just pretty all over – everywhere you walk, there’s something else to look at and be wowed by.

People in other cities are friendly too, but sometimes (we’re looking at you, residents of Budapest and Sofia) they don’t half have sour looks on their faces. Here, everyone’s super-friendly and super-willing to help you out as soon as they realise you’re not exactly fluent in Spanish.

I’m comparing mainly to Paris and NYC here, because we’ve found some awesome apartments in other parts of Europe in the past. We’ve now stayed in two much larger-than-we’re-used-to apartments, for less money than we’ve paid in months.

The bright-and-airy apartment we’re in at the moment cost us £1,000 for the month, but you can get a decent apartment here for as little as £600 if you want to (or even less if you go outside Airbnb). It’s in a mid-16th century building with an elevator (which we’re guessing was installed a few centuries later), beautiful communal areas and secure entry.

Tip: Madrilenos like to stay up very late, and they make a lot of noise. If you can, try to get an apartment on a high floor or facing into a courtyard rather than the street.

The dogs are AMAZING

In Budapest, dogs always come in identical pairs; they’re always small and they’re always wearing ridiculous bows and ribbons. In Sofia, the dogs are all big, scary and moody. In Thailand they’re scrawny and yappy. In Berlin, you get super-obedient dogs – ones who’ll wait outside the supermarket without a leash or sit by the side of the road until it’s safe to cross. Berlin dogs are great.

In Madrid, you get the BEST DOGS EVER. They’re big and cuddly, and they’re super-silly and fun. They look like they’re having a blast.

I’m not sure if “awesome dogs” warrants an entry on this list, but they make us so happy when we walk around that I felt I had to include them.

People aren’t obsessed with being cool

And this delights us.

There are very few “cool” bars and nightclubs. All the best bars we’ve been to (which are full of young people) are either exquisite, old-fashioned classy bars that serve manzanilla with olives, or they’re cafeteria-style places that will give you a whacking huge glass of wine for practically free – plus a ginormous plate of tapas thrown in for actual free.

We went to one of those cafeterias the other night. Inside, people were drinking either wine, beer, coke, coffee or hot chocolate. In London, we always get weird looks if we try to order a hot drink in a bar. Not here. Here, anything goes. A young guy with one of those earlobe-expanding earrings was drinking a beer and delicately eating a chocolate donut with a knife and fork. Really – anything goes.

Also, while it’s a given that Spaniards always look effortlessly well-dressed and beautifully presented, they don’t seem to do it to be cool. At the supermarket, for instance, I saw two beautiful young men packing up their shopping – one was putting his stuff into one of those old-lady shopping trolleys; the other was trying to shove a ready-made pollo asado into a backpack that surely belonged to his girlfriend.

There are more wifi cafes than we originally thought

Heaps of cafes here have wifi – but at first we couldn’t find any that looked suitable for working in. Now that we’ve done more exploring, we’ve come across loads of place that are perfect: lots of comfy tables and chairs, cheap coffee, soft music and a great atmosphere. Also, the coffee only costs about 1.50 euros here.

The wifi is bloody fast

In both apartments as well as all the wifi cafes we’ve now been to, the wifi has been incredibly good.

In the interests of balance…

I probably need to point out some “things to consider” – potential cons to living here (although we don’t see them that way).

Their English is so-so

Which is how it should be: we can’t expect them to know our language. We’re really trying to learn Spanish (we’ve got books, podcasts, audiobooks and TV on the go), so we see it more as an opportunity than a hindrance. But it makes things tricky occasionally – especially as we want to stick to local, untouristy restaurants and cafes.

There isn’t THAT much to do and see

It’s fine for us because we just love wandering around. But there aren’t that many museums, galleries, historical sights, etc. (We’ve been reading about the history of Spain, and we’ve discovered that not much actually happened in Madrid.)

Compared to Berlin and Budapest, it might seem a bit bereft of culture.

The weather gets a bit iffy in winter

It’s never as grey and miserable as London gets in winter, but it can get pretty chilly between December and February. If you’re fair-weather supporters like we are, it’s probably best to go elsewhere during winter.

What do you think?

Have you been to Madrid? What did you think of it – did you love it as much as we do?

Are we missing some massive reason why digital nomads don’t come here in droves at the moment?

Posted on November 6, 2013 by Mish @ Making It Anywhere in Travel & accommodation.