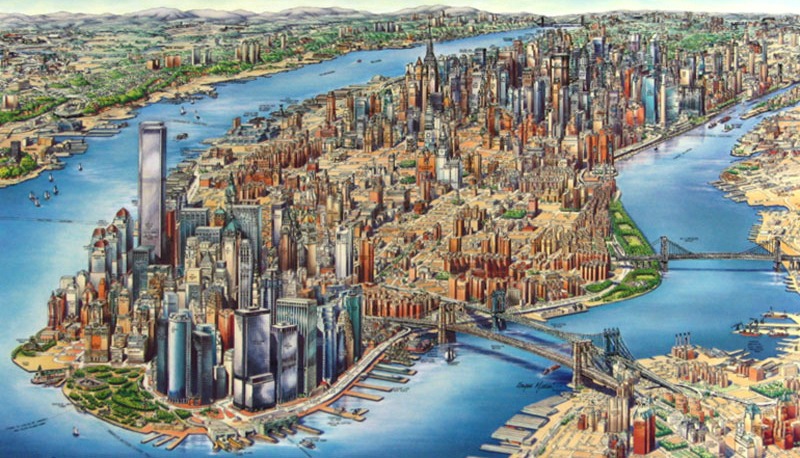 Six months ago we moved to New York for six months, and in that time we lived in EIGHT different neighbourhoods. Here is a (hopefully) useful summary of them all.

Everyone (well, New York magazine in 2010, at least) considers Park Slope to be one of NYC’s most desirable locations. And I can see why: it’s pretty, for one thing – there are lots of brownstone houses and leafy streets. Then there’s all that green space in Prospect Park – actual green, regular, open space rather than carousels, bridges, fountains and a shrine to The Beatles. There are also enough restaurants, bars and nightly events to justify getting a babysitter every night of the week.

There’s more: according to the American Planning Association, Park Slope has an “active and involved citizenry” (which some might consider to be a euphemism for “nosy and interfering” but is surely better than “ignoring that guy who’s peeing into a kid’s stroller while the parents enjoy their foie gras”).

Park Slope is the butt of many anti-gentrification jokes, but if you’re a fan of organic peanut butter, botox, and bottles of red with a decent vintage, who cares? Park Slopers certainly don’t: everyone is so smug that it’s like joking about the decor in Donald Trump’s apartment and then remembering that he couldn’t give a rat’s arse what you think about his penchant for gold leaf.

Park Slope – good if you:

Six years ago, Williamsburg was just a building site with a really cool park in the middle. (Oh, and a bar that did a weekly spelling bee, which is still going strong and is properly amazing.) And just look how it’s grown!

The recession stunted that growth for a while, but now Williamsburg has got beautiful new apartment buildings, an uber-cool hotel, and restaurants that Manhattanites are willing to change trains for (I base this on the fact that absolutely no one lives or works within walking distance of an L train stop).

Sure, the men’s beards will make you think you’re in a gorilla sanctuary, and their tight-tight trousers will cause you to worry on their behalf about future fertility issues. But everyone’s so nice. And so happy. And so charming – even the girls whose bottom cheeks are visible beneath their cut-off shorts.

Williamsburg – good if you:

On Quora you’ll find some pretty heated arguments about whether the Upper East or the Upper West is the place to be. Most are rooting for the Upper West, and I agree: the atmosphere is much friendlier, the apartment buildings (lots of brownstones) are prettier, the ladies don’t wear gym clothes for no reason all day (see below), and the dogs are cuter.

What else does the Upper West have going for it? Trains: there’s the 1, 2, 3, B and C to take you anywhere you probably need to go in Manhattan. And a massive park on your doorstep – either the Central one or Riverside one.

The Upper West also has an almost holiday-like vibe along Amsterdam Avenue on summery evenings: all the restaurants have outdoor seating, so it can feel like you’re in a lovely Spanish village (a big village, which consists of just one very long, very big road).

There are downsides. There are way too many kids, who are all far too loud for my liking (I don’t think their parents are members of any sort of Gina Ford appreciation society). Another downside is Broadway, which is bloody ugly and confuses the hell out of you when you think you’ve finally grasped which avenue comes next.

Upper West Side – good if you:

The Upper East is where you’ll found lots of young women carting around children of a different colour. Yes, this is Nannyville – where Filipino girls spend all day with the kids, while the mothers shop for marinated artichokes in Agata & Valentina, get their eyebrows waxed at John Barrett, and go to meetings with their lawyers about alimony settlements.

There’s more to the Upper East than this, of course. For one thing, Museum Mile (along 5th Avenue) means you can get a heckuva lot of culture without walking very far. And when you’re famished after a long day of looking at pretty pictures, there are some cheap, yummy places to eat nearby (there’ll be a blog post soon about where to eat/drink in each neighbourhood).

Surprisingly, the Upper East is way better than the Upper West for bars and sports bars. A particular favourite is The Bullpen.

Upper East side – good if you:

Chelsea’s an odd one: not so long ago, it was a horrible place and no one wanted to be associated with it. These days, it’s still nowhere near as fashionable as the Meatpacking District (below it) or as edgy as Hell’s Kitchen (above it), but it’s managed to get some cool points from somewhere – probably the realtors – so that basically everyone in Midtown West likes to say they live in Chelsea.

And the realtors/propagandists have done a good job, because – apart from a few nice parts – Chelsea is a bit shit. It looks like a tourist trap (busy, trafficky, bad diners, and deafening bars with neon signs), but the only tourists there are the ones who’ve got lost on the way to Times Square.

Now for those nice parts – which are worth a trip, but in my opinion not a lease. West of 10th Avenue, everything’s rather lovely. You’ve got the High Line, which is a beautiful way to walk downtown without needing to cross any roads. And then of course there are all the galleries, which are in awesome warehousey buildings and provide some fascinating (mostly modern) art that’s definitely worth a look.

Chelsea – good if you:

Ask a New Yorker what they think of Astoria, and they’ll ask you what Astoria is.

Astoria is quite possibly the only under-the-radar area left in NYC. And that’s odd, because it’s got a thriving nightlife, lots of fun restaurants, and great links into Midtown Manhattan (it’s in Queens).

The neighbourhood is eclectic, to say the least. Loads of nationalities have settled there over the years (including Dutch, German, Maltese and Bangladeshi), but today it’s all about the Italians, Greeks and Arabs. They all live in little separate pockets of the neighbourhood, and their respective restaurants are also grouped into separate areas. (And trust me: regardless of what Yelp says, once you’ve tried one plate of pasta or one Greek salad or one shish kebab in Astoria, you’ve tried them all.)

Astoria – Good if you: 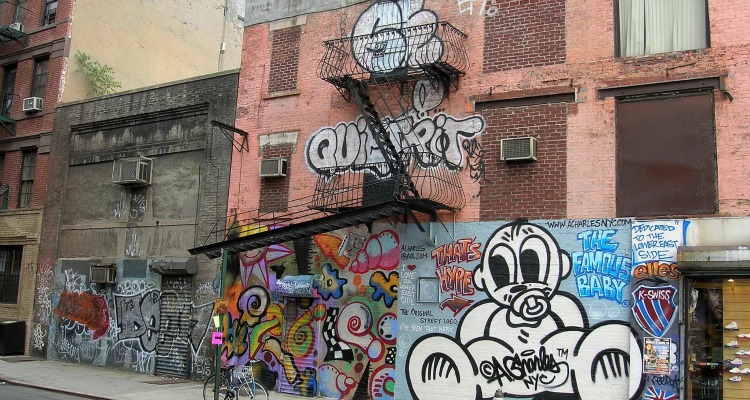 The Lower East side looks how I imagine East Germany looked before 1989: skinny people all wearing the same clothes, living in monotonous grey buildings (albeit livened up with graffiti) and sneaking out to underground, “hush-hush” bars and restaurants late at night.

Yes, the Lower East Side is home to a particular kind of “fun” – a fun that requires you to know secret phone numbers, learn special knocks and climb down lots of hidden stairs before you’re allowed to eat or drink anything – which you don’t (eat at least), because then you won’t fit into your already-too-tight clothes.

It wasn’t always like this. The Lower East Side is one of the oldest neighbourhoods in the city, and it’s historically been the home of the working class, the poor, and minority ethnic groups. It still is, to an extent. When you’re not hanging out in an overpriced bar hidden behind a hot dog store, you’ll notice all the kosher delis, synagogues and South American cuisine. There’s also still a lot of social housing around here.

The mix of old and new has caused tensions, but it’s also a great recipe for a night out: hit some insane bars, get drunk, then end up at at Katz’s Deli for a late-night pastrami sandwich before heading home.

Lower East Side – good if you:

Proximity: that’s something no one really mentions. If you ever get tired of all the nightlife, restaurants, amazing sandwich shops, parks, theatres, boutique stores and cafes, it’s so easy to get to practically anywhere else in the city – either by foot or subway.

It’s also surprisingly quiet during the day. The homeless people – of which there are many – are nocturnal (makes sense: the whole place comes alive at night), and everyone else seems to either be working, reading or doing arty painty things in one of the many, many cafes.

East Village – good if you:

Posted on September 16, 2012 by Mish @ Making It Anywhere in Travel & accommodation.