Once an obsession, now an addiction. The quest to get our luggage as light as possible may be taking up more headspace than it deserves, but C’MON people: 9kg each, and we don’t even smell bad! (We hope.)

When we started this whole live-anywhere-while-we-work malarkey, we travelled around the world with these behemoths:

Approximately 50kg of stuff that we didn’t need but lugged around with us anyway.

Slowly slowly, we’ve been whittling down and realising just how little we need to be happy and comfortable. That sweatshirt that’s only really suitable for temperatures between 68 and 68.9 degrees? Out. The totally superfluous hairdryer (because all hotels and Airbnb hosts seem to supply one)? Chucked. The just-in-case fourth pair of shoes/third pair of jeans/tenth t-shirt/smart dress/EYESHADOW??? In charity shops around the world.

Last year, we were down to this: 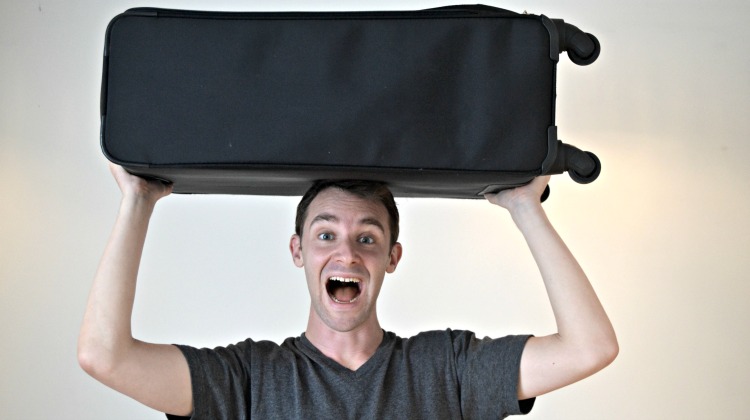 About 20kg of stuff altogether.

But those four wonderful wheels which once caused so much excitement (“Four wheels! Four wheels rather than two! We can just push it along rather than drag it! We’re living in the future”) started to annoy us (“F**k f**k f**k you stupid wheels over gravel,” etc.).

Plus of course, we had to check our suitcase in at the airport each time we travelled – which meant unnecessary fees (on the budget airlines), wasted time waiting at carousels, and constant panics that our life’s possessions had accidentally been rerouted to Azerbaijan.

So in December 2013, we got Tom Bin Aeronauts, which we’re a bit in love with.

They fit in the cabin with us, they’re comfortable, and they hold everything we need (approximately 9kg’s worth of stuff each these days). They also look a lot smaller than they really are (45L).

We run our own businesses while we travel, and as a result our packing list will be markedly different from RTW travellers/travel bloggers.

For example, we never sleep in tents, so we don’t need quick-dry towels or head torches. And we almost always live in cities/large towns (we rely on the infrastructure in order to be able to work), so we can pick up items like shampoo and detergent fairly easily.

eBags medium packing cube. I haven’t tried any other type of packing cube to compare, but this is really light and really hard-wearing. I also like the fact that it doesn’t take up the entire base of my bag: I can fit other stuff around the edges. Tip: roll up your clothes – rather than fold – to fit more in.

The following clothes fit inside the packing cube:

Tanita travel electric scales. We both have a habit of losing weight without realising it, so these are to keep us in check! (They’re also really good for if we ever need to weigh our luggage: I’ll stand on the scales, weigh myself, then do it again – this time holding a backpack. Rob will be on hand with his calculator app to make the necessary subtractions.)

Bag of toiletries. Just a regular toiletries bag, which contains the following:

Tupperware. Usually containing some sort of spare food for the journey.

Asus Zenbook UX32A laptop. And charger. It’s lightweight and reasonably priced, and it’s got all the specs I need. Rob has a higher-spec version (see below). It stays protected in a neoprene case.

SanDisk Sansa Clip 8GB MP3 player. Amazing, incredible, a zillionth of the price of an iPod and just perfect in every way.

Contact lenses. Daily disposables. I’ve now been told about “poste restante” – which means I can get them delivered to other countries too. So from now on I’ll only take about a month’s worth, and will order more if I’m away for longer.

Rab Xenon X hooded insulated jacket. It’s under 300g, rolls up into its own pocket, water-resistant, totally windproof, as warm as hell, can be shoved in the washing machine, and my best purchase to date. (I got the men’s version because I’m 5’9 and the women’s one looked like a crop top.)

Camera charger. (Rob has the camera in his backpack.)

Phone charger. It doubles up as my Kindle charger.

TOMS black canvas men’s slip-ons. The men’s version fits my feet better. Note: If we’re going to be somewhere not very warm for a while, I’ll swap in my lace-up TOMS… the lace-ups I bought don’t seem to be sold anymore, but there are plenty of others available on the website.

Collapsible mug. (I can’t seem to find a version that can be shipped to the US – sorry!) This mug holds 600ml of liquid, and it folds over itself to take up less space (see the photo at the top; I think it probably looks more impressive in real life). I love huge mugs of coffee, so this is perfect to take around the world with me. It weighs next to nothing, too.

Underwear. In one small Ziplock bag, which I squeeze all the air out of. I also take one bikini.

Extra Ziplock bags. For “just in case” – although I’m not sure what the “in case” might be. Still… good to be prepared…

Gloves, mini-umbrella, ultra-embarrassing fanny pack for jogging, and ear warmers (these are the best ear warmers ever).

Plastic measuring cups. Because I’m obsessed with oatmeal, and I need to get the ratios just right.

Debit card readers. To make online transactions for a couple of my bank accounts.

Sea to Summit Ultra-Sil Sling Bag. What it lacks in sex appeal it makes up for in size and weight. This bag has been load-tested to up to 130kg, and it fits inside its own teeny weeny packing sack (which is attached to the bag when unpacked, so you don’t have to worry about losing it). It acts as my laptop bag as well as my grocery bag, and it’s just wonderful.

What I wear to travel

Eagle Creek medium compression bag. I tried this compression bag and wasn’t such a fan: I didn’t like how it took up the entire base of my bag. But Rob really likes it – and the compressing seems to have more of an impact on his thicker, heavier clothes.

Note: Unlike the packing cube, you should fold your clothes for best results.

The following items fit inside the compression bag:

Merrell Barefoot Flux Glove sports shoes. These trainers mean Rob no longer has use for socks in his life (his other shoes are slip-ons and flip-flops). They’re extremely lightweight, and you can actually fold them in half when packing.

Logitech USB Headset H530. This is what Rob uses when recording The Property Podcast.

Targus mouse. It’s not this one, but very similar to it.

Panasonic Lumix LX7 digital camera. It has a heap of manual functions and operates almost like a DSLR if you want it to, but it’s far smaller and lighter. Plus, you can use it like a point-and-shoot if you’d prefer.

Hair straighteners. (He’s the one who insists on taking them, so he’s the one who has to carry them.) I’ve had my GHDs for eight years, and they’re still going strong. They have worldwide voltage, which means I don’t have to worry about them blowing up in certain countries.

Ziplock of some more toiletries (including liquid ones)

X-Mini Portable Capsule Speaker. It means we can watch documentaries, talks, interviews and trashy telly on our laptops with fantastic sound. It’s lightweight and super cheap.

Snacks. M&Ms, instant coffee in a Ziplock (for when we first arrive), and any other food from the fridge that we can’t bear to throw out.

Passports plus any paper documents we need with us.

Debit card readers. To make online transactions for a couple of his bank accounts.

What Rob wears to travel

Is it worth it?

Firstly, it needs to be mentioned that there are many other digital nomads who’ve got things a lot lower than we have. For example:

And is it worth it – narrowing down our belongings to the bare minimum? Oh my goodness YES!

Of course, we could go down further. I don’t need measuring cups for my oatmeal, and Rob could easily get rid of his rarely worn flip-flips and just buy some new ones if he ever decides he wants them again. But these things fit in our bag and we like having them with us, so we figure why not?

So… what do you pack?

And what bad decisions have we made?
And what items can you simply not live without?
Let me know in the comments!

Posted on June 4, 2014 by Mish @ Making It Anywhere in Travel & accommodation.