And we’ve reviewed them all. 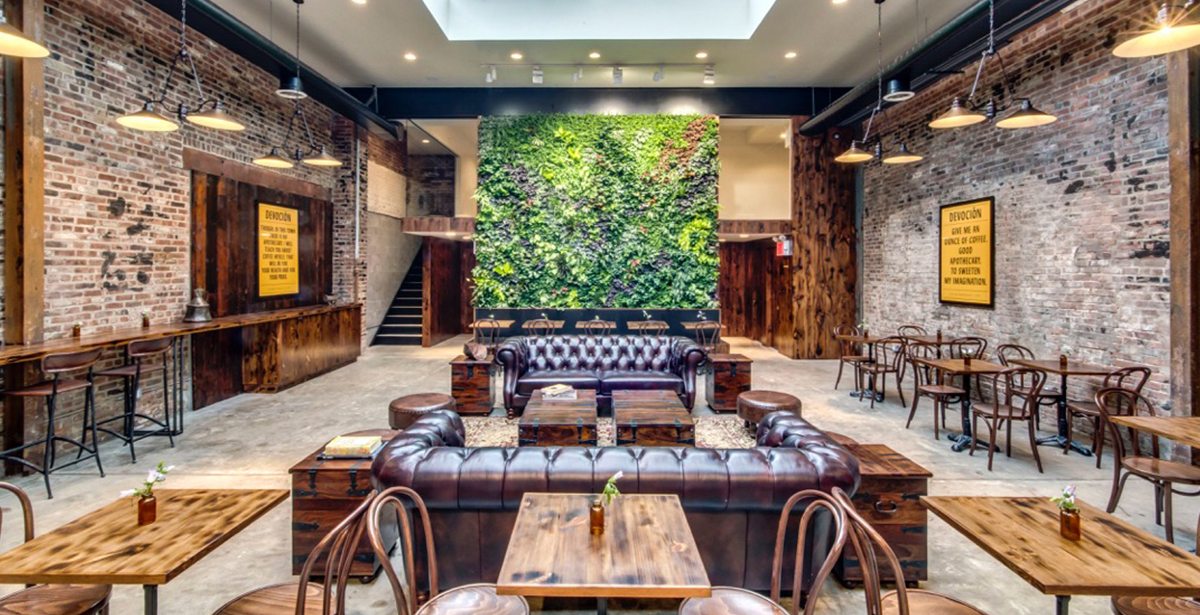 One of the many, many great things about New York is just how many fantastic wifi cafes there are – all around the city. And we managed to work our way (literally) through 34 of them.

Just to be clear, that’s 34 different cafes: we went back to our favourites multiple times.

Below are reviews of all of them. But in case you can’t be bothered to read through everything, here are our favourites:

Top 5 spots to sit and work

Top 5 places for the coffee itself

(Note: we spent six months in NYC back in 2012, during which time we visited 47 cafes in total – in many different neighbourhoods. We didn’t revisit them all this time, so you can read reviews about them here.)

This place is the opposite of your grandmother’s living room (unless you have a Scandinavian grandmother): it’s so minimalist it’s a surprise they have what they need to make coffee. The seats are as uncomfortable as hell, but it’s actually not a bad spot to work from: big mugs of coffee and tea, good wifi, a few outlets, and not too busy.

One of my favourite places in Manhattan but I’m not sure why. It could be the twinkly lights that decorate the indoor garden at the back. Or possibly the fact that I get to order a “cup o’ mud” (coffee) – and it arrives in a big orange cup. Or perhaps it’s because the coffee isn’t too try-hard: it’s just a cup of coffee and they don’t ram its origin or brewing method down my throat.

Whatever the reason, it definitely isn’t the dead-eyed server who hates us and we don’t know why.

There’s no free wifi so you’ll have to tether if you’re planning on working – which they’re fine with as long as you don’t sit there for three hours on one coffee. (Also, don’t go at the weekend: there are lines out the door for brunch.)

Go for the use of a printer, stay for the decent wifi, outlets and huge selection of drinks (which is just as well because the coffee isn’t great). The rocky road something-or-other is scrumptious and dinner-ruining.

Cafe Pick Me Up

No one wants to be here – including the cafe itself, apparently: it’s moving location. Which might help to explain why the place was boiling hot and dirty on the two occasions that we visited, and the staff just kind of seemed to have stopped bothering.

Why did we return? For the amazing brownies. Which had run out. It wasn’t a great afternoon.

We went to B Cup because it was near the laundromat. But then we realised the laundromat has wifi and tables – so we just went there every time we washed our sheets because B Cup is f**king freezing and the laundromat isn’t. The coffee at B Cup is pretty generic, but it’s a nice place and we’d go back if we didn’t need mittens.

We don’t know why we came here again. But we did. And it wasn’t a good experience. Rob does love the cappuccino (the coffee comes from Intelligensia, apparently).

The Ninth Street Espresso that’s actually on 9th Street is far better, but we didn’t make it there this year.

On par with B Cup Cafe in terms of freezingness. It’s a much smaller spot that the Thinks in Union Square and the West Village, there’s no wifi and the layout is silly. There’s no real point in going to this location unless you need to be in the area or if you want a really good cream cheese brownie.

Why don’t more people come here or talk about it? There’s a back yard and everything!

I can’t be sure what music they play, but in my mind it’s the same bizarre pop covers they have in the cafes in Bangkok and Chiang Mai – because this place has an identical look and vibe. It even has the same lurid, bizarre pastries – and there’s bubble tea.

Huge place that’s full of freelancers – which is surprising, as there’s no wifi. Good coffee and lovely servers.

No wifi and hardly any tables, but Joe coffee is good stuff. Also (and this in no way influenced my review), the servers are ridiculously good looking.

Stumptown does the best coffee, bar none. And this is a stunning location from which to drink it while working. Don’t bother with the pricey brownies (I think they were vegan or dairy-free or gluten-free or something – maybe all three): I still get upset when I think what a waste of money that was.

Even larger than the one in the East Village, but this one has wifi. Sometimes.

It’s so big and busy that it always looks a bit messy and dirty, but it’s open late and you’re almost guaranteed a seat.

Boooo to all the health violations (as of June 2015)! And our friend nearly broke her teeth on a stale muffin. Rob gives it the award for “the longest time taken to serve me the world’s most unremarkable coffee”, but for some reason it’s jam-packed.

First things first: it turns into a karaoke bar at night – which explains all the “Those mics cost $300 so please don’t drop them” signs.

It’s an odd spot: deathly quiet (presumably to give the servers a break), full of freelancers, and with the most passionate-about-coffee barista we’ve ever seen.

If you want to stay and work there for the day, they have a great deal: $11 for unlimited coffee.

Don’t even THINK about getting your laptop out, because you’ll be muttering “by name… by nature” to yourself if you do. This is a strictly computer-free zone, but worth visiting because the cappuccino is incredible.

You know that episode in Friends where Ross is trying to list all the US states and he totally forgets about Delaware? That’s our experience of Pushcart: we never fail to forget it. When we do remember it, we say, “Ohhhh Pushcart! Great place to work from! Good coffee – they serve Stumptown, I think.”

Irving Farm has well and truly rested, slept and died on its laurels. It opened in 1996 and is still extremely popular, but heaven knows why: it’s basically Starbucks but with uncomfortable seats, dirty floors and more screaming children. No wifi either.

So here’s what you do: you get your coffee (we recommend cold brew) from the teensy little Stumptown, then you take it next door to the Ace Hotel lobby and sit and work from one of the many sofas or tables – along with a gazillion other freelancers.

The wifi is free and there are outlets galore. Sure, it’s so dark you’ll need to bring a stash of carrots with you, but lightbulbs vs wifi? We choose wifi.

Looks identical to Starbucks but isn’t. This small chain is very proud of its coffee – Rob was driven crazy by a guy saying “Do you want to sample our new single-origin from East Timor?” to every person who walked through the door – but it’s not that amazing. Plenty of seats and outlets, and filled with studenty types.

It was Birch Coffee that first got us into cold brew, and it’s still fantastic stuff (although we’ve decided that Stumptown is marginally better). Unfortunately, the coffee shop itself isn’t so great anymore: it’s moved a few stores down from where it used to be, and the much-smaller space feels a bit half-finished and unloved.

We worked from Berkli many times when we were last in NYC, but this year we only made it there for a quick coffee (which wasn’t wonderful). There are two large tables for laptop users, and everything else is reserved for people who do more than look at a screen while they eat or drink.

There are lots of delicious-looking sandwiches and salads.

At the risk of making this blog post even more pretentious than it already is… this is how you make a macchiato.

When Taylor Swift and all her friends are hanging out in her Tribeca apartment, we imagine this is the kind of place they’d come for coffee. There’s enough seating, but we didn’t try the wifi (reviewers say it’s good).

Despite the lack of wifi, it seemed like an OK place back in 2012. But these days it’s not much better than the original Gramercy location. There are fewer screaming children and the chairs haven’t fallen apart to quite the same degree, but it’s still just a bit of a mess.

Freehold is basically our dream turned into reality. For a start they serve Stumptown, which – as I may have already mentioned – is the best coffee ever. There’s plenty of seating, outlets everywhere, excellent wifi and lovely staff.

We’re not quite sure what Freehold actually is though: it looks like the entrance to a hotel, but there are no rooms. And there’s a sort-of concierge desk where a lady stands and thanks us for coming every time we leave… but we don’t know what else she does other than that. Please enlighten us if you can. (Update: we’ve been enlightened!)

The servers are a bit up-themselves and the room’s a bit dark and the wifi sometimes doesn’t work, but other than that it’s a good place to work from – especially when they’re belting out early-00s pop classics. Strangely enough, I mean all of that entirely unsarcastically. (And they serve Stumptown. This is getting silly now, but I promise you this post isn’t brought to you in association with Stumptown.)

A coffee shop with a realtor’s office at one end… it’s an odd setup, we’ll admit – but it doesn’t detract from the fact that Sweetleaf is a great place for laptopping. It has two USPs: awesome Chinese pop music, and delicious carrot cake.

Always packed, despite no longer being the best coffee spot in Williamsburg. Lots of seats but a limited number of outlets.

GORGEOUS spot. The coffee is expensive, but get the fruit tea anyway – and get it iced. There’s no wifi on weekends, but you’re free to tether if you want to.

Interesting selection of coffees, plentiful seating and great location (right by the East River). The servers are rude and utterly useless though – and we’ve heard similar complaints from others who’ve been there.

Teensy little cute place with lovely servers. Apparently it’s packed during the day, but it clears out by early evening.

It’s practically empty before 5pm, and everyone who is there seems to be a friend of the Mexican owner. And because we can’t really understand what they’re saying, we get the dual benefit of a lively atmosphere while not being distracted by other people’s conversations. Loads of seats and outlets near the back, and great wifi.

We never worked from here, but it’s a bright and modern space with good wifi and a few outlets. Fantastic cold brew and friendly staff, but surprisingly pricey for Bushwick.

Not quite sure what all the Foursquare fuss is about. It’s fine – and the wifi works well – but nothing special.

The cafe is in a huge converted warehouse full of mismatched furniture, repurposed tables, and hipsters. Really good fun but unfortunately the coffee didn’t live up to the hype: it was just a bit nothingy.

Tip for you: don’t sit near the coffee roaster if you want your hearing to remain intact.

Posted on June 18, 2015 by Mish @ Making It Anywhere in Location independence.