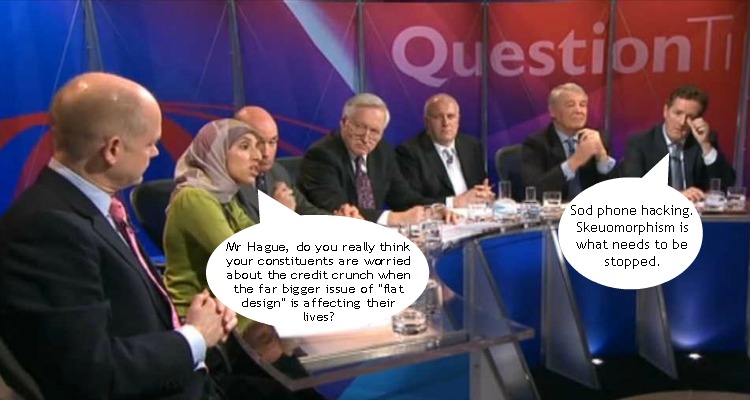 We were watching Question Time on the BBC iPlayer the other day (living the dream, as ever), and the presenter opened with, “Well, I think we can all guess what the biggest story of this week was.”

We looked at each other. Was it the battle between skeuomorphic and “flat” design trends? Or could it have been edged out by the news that the Opera browser has shifted to the same rendering engine as Chrome and Safari?

No, it turned out that, (a) the rest of the UK was more exercised by the fact that they’d been inadvertently eating horse meat for years, and (b) you really wouldn’t want us on your pub quiz team.

Yup, it’s fair to say that we pick our own, very niche news and entertainment sources these days. And why not? We’re lucky enough to live in a world where if you’d rather listen to a weekly Harry Potter podcast (currently up to episode #261) than commercial radio, you can. With all this possibility, isn’t it just laziness to accept being spoonfed the same stuff as everyone else?

(The downside is that even though we make sure we keep on top of the mainstream news, we lose track of what’s considered “important” to most people because it all gets equal weight in our RSS/Twitter/iTunes streams.)

We’ve become equally intentional about seeking out the people we want to hang out with. This week we had dinner with some entrepreneurial Austrian beekeepers, and practised our French over Skype with a girl in Taiwan. When that kind of thing is possible, why would you settle for just interacting with the people you stumble across by chance?

It’s not a case of being weird just because we can: we’ve come to realise that your mindset is drastically shaped by the media and the people you expose yourself to. So when people ask us how to transition to a location independent life (which, for some reason, they do), we tend to say “change your inputs” and “buddy up”.

Then we want to say nine other things, but either we’re tired of typing or our interlocutor has stopped listening. So we decided to write The Anywhereist Manifesto to capture what we think are the key ingredients to doing the work you love and living life on your own terms. It contains such gems as “work hard” and “try to earn £1”, but it sounds SO much more inspirational in context, we promise.

Before we get the PDF designed up nicely, we’d love to know what you think. If you’d like to take a look then tell us what’s useful, what’s confusing and what we’ve missed,  (newsletter subscribers only – sorry!).

(Warning: We’re tracking this link, so only click if you’re willing to have Mish aggressively chase you up for your opinion – she’s unusually determined on this point.)

Now, while you read that, we’re off to check whether we’ve missed any other big pieces of news – like a human landing on Mars or Lance Armstrong finally admitting something…

Posted on February 18, 2013 by Mish @ Making It Anywhere in Your new life skills.