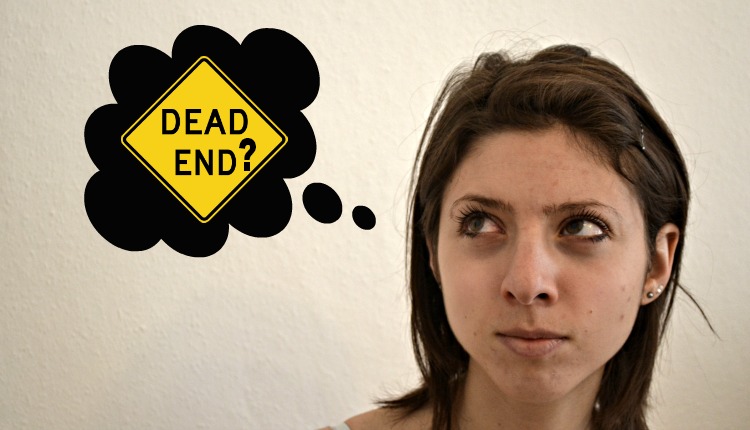 You might have noticed that we have strong opinions about jobs. We think they’re fine if you enjoy them and look forward to them and have some degree of autonomy within them. But if you’re a middle manager in an environment where you have no purpose, where you lack autonomy, and where you basically spend five days a week hating your life, we want you to quit.

We want you to quit your job and do work you love on your own terms, for money you decide to charge.

And although it’s much easier than you’d think, we do understand that sometimes certain obligations mean you can’t just up and leave right away.

In the meantime though, don’t just waste away those hours, weeks and months (hopefully not years)… make the most of them. Milk your bullet-point-slideshow-obsessed, user-of-words-like-“synergies”, lover-of-flipcharts knobend boss and his/her backwards company for every damned bit of information and inspiration you can.

Don’t just do the work they ask you to do and then mess around on the Daily Mail site for the rest of the day. ADD VALUE. Do extra work that they haven’t asked you to do, using your own initiative.

I’m not saying you should stuff 50 envelopes when they ask you to stuff 40, or that you should ask 14 questions in a focus group instead of 12. I’m saying you should think laterally about how you can extend your task in a different direction – in a way that shows you’re motivated, you’re intelligent, you’re interested in what you do, and that you care about the company you’re working for.

So when they ask you to stuff 40 envelopes with marketing bumph, you could suggest handwriting (or getting someone else to handwrite) the envelopes so that they look more personal and people are more likely to open them. Or affixing wonky stamps rather than franking the envelopes, because it’s been proven to increase open rates (because the envelopes look less like marketing materials). This is a bit of a boring and obvious example, but hopefully you get my drift.

Your boss probably won’t thank you for it or allow you to do it, but that doesn’t matter. The point is you should always be thinking about how to add value, because when you strike out on your own, you’ll constantly need to work out how to add extra, unasked-for value to your clients.

For example, when a client asks you to build a run-of-the-mill website but you suggest an add-on that hardly costs anything but will increase their revenue tenfold, they’ll stick with you for the long term and recommend you to everyone they know.

2: Even the biggest knobend bosses have some skills to pass on

When Rob used to work for a company, his boss was so driven/sociopathic/brutal that he was actually the inspiration for a shit of a character in a well-known book.

But dubious character traits aside, he was very good at running a company – his division of seven people was more profitable than the parent company that employed nearly a hundred.

The secret? He hired the best people, and left them to get on with it. He just steered the ship, and  used the rest of his time to plan refurbs of his cocking massive house in Hampstead.

Rob hasn’t become a sociopath, but he did take something away from his time there: whenever we hire people, we hire people way better than us then get out of the way.

3: Even if they really have no skills to pass on, you can learn something from that too

Here’s what I learnt: jargon and bullet-pointed PowerPoints are never OK. And if you use them, the only clients you’ll  attract are box-tickers or middle managers who (possibly just like you) couldn’t really give a toss about what you’re doing for them as long as it makes them look good to their superiors.

It really does seem like a general rule: jargon and bullet points –> box-ticking / couldn’t-give-a-shit clients

So we do everything we can to avoid both jargon and bullet points, and as a result we get delightful and interested clients who care deeply about the work we do for them.

Try to find out where your company is going wrong, and work out ways to solve or avoid the problem. You can try telling your company how to help themselves and attract higher-quality clients, but they won’t listen. So instead, keep hold of the ideas for when you’re working for yourself.

I’ve given a very specific, client-facing example, but the point applies regardless of the industry you’re in.

4: Take up any training they offer you

When an expert comes into the office to train you, or you’re offered the chance to do out-of-office training in whatever-the-subject-matter, damn well take it because it’ll come in useful somehow.

I was pretty much forced to take training in Microsoft Project (project-management software). Even after a full day of learning, I never fully got to grips with it, I hardly ever used it, and I detest it as much as most other people. But it means I understand why other project management software systems are so much better – and when some of my clients complain about MS Project, I can recommend the alternatives with authority.

Some training comes in useful for reasons other than empathy and understanding though: they can teach you real, valuable skills in things you might not normally consider learning about.

5: Use any spare time to learn something or start setting up your own business

I have a friend who works for the council in the UK. He has practically bugger all to do, so spends much of the day surreptitiously checking Facebook on his phone (it’s blocked on computers in the office). He hates his colleagues, lives for the drunken weekends, and spends all of Sunday dreading Monday.

If my friend enjoyed his job at the council, that would be fine. But he doesn’t. At all. And he’s wasting all his time there doing nothing to get out of his situation.

If you hate your job and know you want to start something of your own, use any spare time at work to learn, or earn, or both. Learn about business/freelancing, but also about anything you’re interested in too: it’ll all give you ideas and inspiration. And have a go at earning money – no matter how little – on the side. Rob gives you an action plan in this blog post.

When we had jobs, we started up countless businesses and did heaps of freelance work (mainly copyediting and press-release writing) during our lunch breaks and spare time. There were many horrible failures, but a few mini-successes – and they all gave us experience and the confidence we needed to actually quit and set up on our own.

Here’s what you need to do:

6: Get out as soon as you can, even if it’s not right this second

I’m in the middle of reading the most wonderful book called 30 Lessons for Living: Tried and True Advice from the Wisest Americans. In the book, the author interviewed more than one thousand Americans over the age of 64 to “seek their counsel” on the big issues – children, marriage, money, career and aging.

Here’s what these wise Americans say about careers:

“You know that nightmare where you are shouting a warning but no sound comes out? Well, that’s the intensity with which the experts [the wise old Americans] wanted to tell younger people that spending years in a job you dislike is a recipe for regret and a tragic mistake. There was no issue about which the experts were more adamant and forceful. Over and over they prefaced their comments with, ‘If there’s one thing I want your readers to know it’s…’. From the vantage point of looking back over long experience, wasting around two thousand hours of irretrievable lifetime each year is pure idiocy.”

“… if there’s another career you wish you could pursue but you are worried that it will bring a drop in income, do it anyway. There is literally no time to waste… From somewhere around age twenty we begin forty or more years of working, for eight or more hours a day, forty-eight or more weeks a year. No financial reward, they tell us, can make up for the time lost on a boring, tedious job.”

Has this helped at all? What other advice should there be on making the most of a dead-end job? Let me know in the comments!