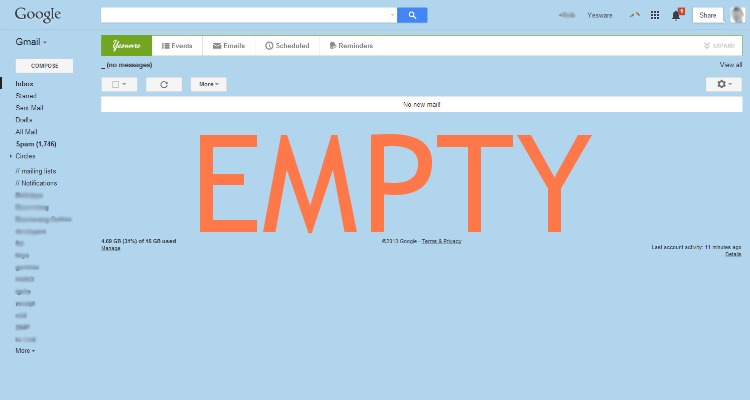 Cutting down the amount of time you spend on email is the single easiest way you can create extra productive hours every single day.

(Unless you play WoW. In which case, y’know, you should probably go work on that instead of reading this post.)

In this post, I’m going to run through a system that’s at least halved the amount of time I spend on email.

Because the problem isn’t email per se: it’s that most people deal with email in an incredibly inefficient way, for which it was never intended.

I mean, did people in the 1960s spend all day walking to their mailbox every 5 minutes “just in case”, and keep the paperwork for all their most important tasks in the middle of a big pile of junk mail?

Possibly, if they were doing a lot of LSD. But that’s not the point.

This system is one that I’ve stuck with after a couple of years of deliberate experimentation. By revealing it I’ll probably save even more time, because everyone will think I’m crazy and never write to me again.

Parts of it you’ll have seen on other blogs, but there might be a useful extra trick that you can pull out and use to save yourself some time.

Note: Almost every trick here involves being a Gmail user, so this probably isn’t worth reading if you’re not. Many things about Gmail annoy the heck out of me, but the extent to which it’s extended by third-party plugins makes it worth sticking with.

1. Drastically reduce what reaches your inbox

You might complain that you get “hundreds of emails a day”, but many of those are probably alerts about a new Facebook message, daily deals emails, and general stuff. You don’t directly need to act on them, but they clog up your inbox all the same.

So the first step to email sanity is receiving less email, or at least making sure you see less email.

Use chat rather than email for ongoing communication

Along with my partner in a new venture, we discovered we were emailing each other 10+ times a day – so we moved our conversations to Hipchat instead. Our chats are still searchable, and we can send each other one-liners as things occur to us.

I never got on with Google Hangouts, but you could use it instead of Hipchat if you wanted to – with the added benefit that you can search your Hangout transcripts from your inbox.

Turn off email notifications from all social sites

Your inbox is not the place to find out that one of your pins has been repinned, or that someone has endorsed you on LinkedIn.

So for a week, every time you get an email from a social site, just use the link at the bottom of the email to click through and turn off all the alerts. You won’t miss anything, and your inbox will be a calmer place.

Use the “plus” trick to aggressively filter

If you insert a “+” at the end of your Gmail address, anything after it will be ignored and email will come to you as usual – but you can still make use of it.

That means that mailing list messages never clog up my inbox, I never see an “unread” count that distracts me, yet I can read them whenever I want by just clicking on the //mailinglists folder.

(You can use the same trick to find out if a site sells on your email address: if you sign up with youremail+nameofsite@gmail.com, any spammers who they sell your details to will use that same email address, so you can instantly track the source.)

2. Train yourself out of checking your email

You’ve now restored some sanity, but you still don’t want to be checking your email every five minutes. So:

If you get any kind of notifications about new email, turn them off now.

You probably have Gmail open as the first tab in your browser, and reflexively tab over to it every so often.

Don’t do that. Get in the habit of only opening up Gmail when you want to “do email”.

Use a bookmark so you can send without checking

Sometimes you need to send an email, but that means you have to go into your inbox. You see five new messages, and half an hour later you’re still there – and you’ve forgotten what you were meant to be doing in the first place.

The solution is to use a bookmarklet that allows you to send an email without having to see the contents of your inbox. Here’s how to do it.

Use the “Empty Gmail” hack

Your inbox should only be where new messages are contained until you decide what to do with them: delete, reply, archive, and so on.

It takes some discipline to force yourself to do that, but there’s a trick that forces it upon you – by making emails disappear as soon as they’ve been read.

It’s kind of hard to explain, but read the full explanation of how to set it up from Leo Babuata, then watch my video of it in action:

Gmail’s compose window is an abomination, but you can use a browser extension called Gmelius to restore the old, sane version. I find that it takes me significantly less time to send an email when I’m using the old version of “compose.

As an added bonus, Gmelius can also remove adverts and lots of the general junk that clogs up the Gmail interface.

The only downside is that for me at least, it’s broken all Gmail’s keyboard shortcuts. I can’t find anything about the issue online, but let me know if you know how to fix it!

Star messages to batch your replies

Email takes up far less time when you batch your replies and “do email” once or twice a day, rather than sending ad-hoc replies every time something comes in.

When I’m processing my inbox, I star all the messages that will take more than 30 seconds to reply to. Then, normally in the evening, I’ll go through my “starred” folder and reply to everything in there in a single batch.

Use snippets to speed up repetitive emails

If you find yourself saying the same thing to multiple people over and over again, use “canned text” in Gmail so you don’t have to type it out every time.

Actually, I find the user interface for canned text to be really hard to use, so it would probably be better to use a tool like TextExpander so you can just activate each snippet with a keyboard shortcut.

Use Boomerang to slow conversations down

OK, so the primary use of the Boomerang extension is supposed to be to return emails to your inbox later. So you can essentially “hide” an email for a couple of days when you’ll be better able to deal with it.

But my slightly misanthropic use-case is to use Boomerang to slow down conversations.

So if I want to reply to someone now, but I know they’ll just write straight back and give me something else to reply to, I’ll use Boomerang to delay my response until the next day, or later.

It means I’ve got it off my mind, but I’ve bought myself some time before the next round of the back-and-forth.

I’ve probably done this to you. I’m sorry. (But I’m not really.)

Eliminate “I can’t do Thursday; how about Friday?” threads forever

“Scheduling tennis” generates an ungodly number of emails, and it’s no fun for anyone.

So if you’re booking a meeting with one other person, use You Can Book Me to send them a link to a calendar where they can book one of your available slots. It synchronises with your Google Calendar so they appointment will just magically appear in your schedule – no emails needed.

For getting groups of people together, I use Doodle. Everyone picks from a selection of times, and you (as the organiser) just get a single email once everyone has replied to let you know which time is the winner.

I also use a couple of email tools that aren’t directly connected to spending less time on email.

Learn about your correspondent with Rapportive

Rapportive means that whenever someone emails you, you’ll see all their social profiles on the right-hand side when you’re writing an email.

That gives you context when you’re replying to someone you’ve never heard from before, and means you can quickly check their Twitter feed (say) to drop something personal into your reply.

You can also use Rapportive to guess anyone’s email address, which is great for cold emailing.

Check whether your email has been opened with YesWare

YesWare lets you track your email so you can monitor whether it’s been opened, and if any links have been clicked.

That obviously makes it great for doing cold email outreach (to see which subject lines work best, and if people are clicking through to find out more), but it’s also good for peace of mind if you’re sending an email that you really need to get through.

Or just for spying on people. That works too.

What do you think? Any tips?

On a scale of 1 to backing-away-slowly, how nuts is my email system?

Do you have any tricks of your own that I can try?

Or if you struggle with email overload, what’s your biggest challenge with solving it?

(Which I won’t get an instant notification about, obvously.)

Posted on December 6, 2013 by Rob @ Making It Anywhere in Your new life skills.