1: The alphabet is Cyrillic

And while that’s apparently no secret, we had no idea until the day before we travelled there (we were a bit behind on implementing our SOPs). And here’s the problem with Cyrillic: you can’t type it into Google Translate and see what the words mean.

When you combine that with the fact that no one speaks a word of English, you’ve got two options for the duration of your visit: stay in your apartment, or wing it. We chose to wing it. Which resulted in unintentional tram rides to areas we didn’t really care for, eating things that definitely weren’t chicken, pork, beef, lamb or fish, and still not being entirely sure we walked up part of Vitosha Mountain or just a cocking steep hill.

2: People come alive on the tram

The default demeanour of a Bulgarian person would never be described as “jovial”. And when you get served in a restaurant or cafe, you’ll be inclined to assume that their demeanour is an accurate reflection of their personality (we’ve never seen so many grunts or had so many menus slammed in front of us).

But before you start to hate them all, get on a tram and see what they’re really like.

The respect shown to older people is incredible: kids, teenagers and even pregnant women leap up from their seats when someone looking slightly more mature gets on.

And everyone’s so tactile and friendly: old men will ruffle the hair of young kids who’re standing in the aisles, and men and women will touch the arms of strangers they’ve only just met when chatting to them.

3: Their clothing choices are… interesting

I’ve never felt so goddamn fashionable in my whole entire life. We figured they must have gone wild on personalityful clothing after communism, because they’re all wearing crazy bright items that I don’t know the names for (they’re not t-shirts, or dresses, or trousers… they often just seem like newly invented clothing items that don’t exist anywhere else in the world).

There’s lots of orange, pink, leopard print, fur and gold dangly things… mainly on the women, but also on the men.

I tried to take photos but I think my camera was blinded by the sight.

4: The very centre of Sofia is beautiful

In central Sofia you’ll find a stunning park, gorgeous government buildings, and lovely wide brick roads. There are outdoor cafes (with English menus, because this is the touristy bit), water fountains and outdoor art fairs.

We never visited Lozenets, a suburb that’s meant to be pretty. But from everywhere else we saw (and we saw A LOT, because we kept getting the wrong buses/trams), there aren’t any “hidden gem” areas. We could see signs of post-communism infrastructure, but it’s still very early stages and the buildings are run down, the sidewalks are a nightmare, and there isn’t much to do or see.

Bulgaria is apparently the birthplace of yoghurt, and the stuff is everywhere. Not only are there about 300 varieties in supermarkets (all really cheap), but there’s also yoghurt in loads of Bulgaria’s signature dishes.

6: The food is surprisingly healthy and delicious

When we first arrived and went to our local supermarket, we were a bit scared: 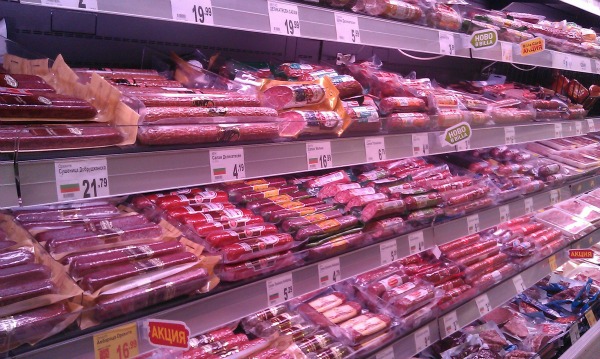 And then when we went to a really touristy restaurant (to ease ourselves into the idea of going to a restaurant with no English), we ate two plates of food that we could practically feel clogging up our arteries.

It went on like this for a couple of days, throughout which Rob would spend insufferable amounts of time staring at himself sideways in the mirror.

And then we got braver and decided to try some more off-the-beaten-track restaurants – where we had grilled meat kebabs (kebapche / кебапчета), traditional Bulgarian meatballs (kufteta / Кюфтета), and lots of amazing fresh and exciting salads.

7: The Mafia runs the city

We think. Well, that’s what everyone told us before we rocked up. And lots of people moved out the way when we got our camera out, so based on that, it’s true.

8: Vitosha Mountain (if we went up it) is steeeeeep

We read online about trekking up Vitosha Mountain, and everyone made it out to be an ambient upward stroll to reach a beautiful waterfall. But oh. my. god. it’s steep. Very pretty and nature-y, but steep. In fact, before you even reach the start of the bloomin’ thing, you’ve got to walk up a road so vertical you can’t believe you’re not sliding back down it.

9: The coins are ridiculous

So the official currency is the “lev” (plural “leva”), and one lev is made up of 100 “stotinki”. The coins – 1, 2, 5, 10, 20 and 50 stotinki, and 1 lev – are teeny tiny and practically indistinguishable from each another. And we think this is why everyone wanted the exact money for whatever we were buying – it’s just too much hassle to find the right coins to give us in change.

In most places, if we didn’t have the exact money, we’d get a vague approximation of the correct change. And in one place, the waitress spent about five minutes filtering through her purse before dumping some random coins on the table and strutting off.

10: We probably missed out on an awful lot of awesomeness

The language barrier really was a problem. We tried to learn a few key words and phrases, but they had so little in common with other languages that it was hard to remember them. As a result, we probably didn’t get to see enough of what Sofia has to offer. We did the best we could, but we struggled.

If we were to visit Sofia again, we’d hook up with someone Bulgarian and get them to take us around each day and show us how things work. It’s a great city, and although we got to appreciate a lot of it, we definitely missed out.